In 2018 MAP Robotics installed six Omron LD90 robots into Toyota’s new Parts Centre in NSW. The Robots are Omrons LD90 series AIVs which use sensors to intelligently navigate around its environment, as opposed to AGVs which use guides on the floor to stick to a set path. AIVs have the advantage of being able to move around changing environments, so if a box is placed in the way, the AIV will then find a new path and go around it safely, if no safe path can be found it will then stop and stay still.

As part of this project, MAP also installed twenty-one conveyors that act as buffer zones for the tubs being picked up and dropped off by the AIVs, to  automate Toyotas warehouse.

Each conveyor contains a number of zones that automatically index tubs to the next zone if empty, some conveyors are used to transport full tubs away and others are used to bring empty tubs back the other direction. There were also incline conveyors/transfers and a number of specialty sections to meet the requirements of Toyota’s warehouse. 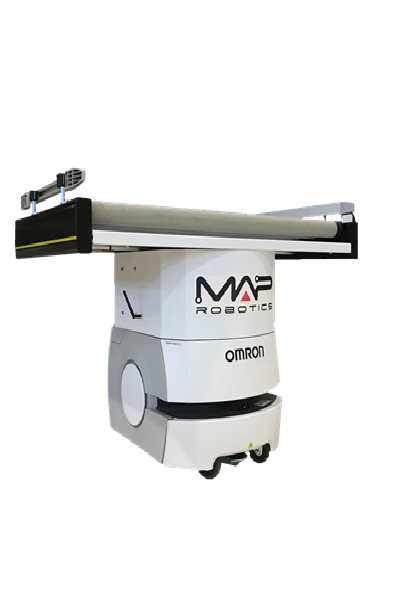 Toyota is set to unveil the most advanced automotive distribution centre in Australia as it transitions from carmaker to vehicle and parts distributor. The world’s leading car manufacturer has built a multimillion dollar facility at Kemps Creek — an emerging new industrial hub in Western Sydney.